Admission: I’m a procrastinator at heart. I wanted to share a lot more on goals last month, but then my imposter syndrome kicked in and I had a billion other easier things to do, so I let it slide…

That’s pretty ironic, given the fact I wanted to talk to you about setting goals you actually keep.

I’ve done some contemplating on why I didn’t follow my own advice and came up with one simple check for goals. Planning to use it in 2019 so that I won’t waste time on setting goals I won’t follow through on anyway.

So, here it is… the ultimate goal check (you can imagine either a drum roll or a horror movie tune in the background, depending on your relationship with goals):

Your score on the reward-effort scale should be positive (by the way, if you’ve never heard of this equilibrium before, that’s probably just because you haven’t been inside my mind, so don’t beat yourself up over that).

So what does that mean? Simply put: the harder it is to do something, the more it has to matter for you. If it doesn’t, you won’t have enough motivation to put in the work.

Or, like in my case, losing sight of why you’re doing something. I forgot why sharing tips about goals matters. And once I did that, it was just too easy to focus on other things.

The reward and effort are perceived

One thing you might note above is that both the reward and the effort are very subjective.

The same goes for the effort. Others might think that making a phone call only takes 5 minutes of your time, but when you have social anxiety the emotional investment increases greatly, turning the effort into something big.

3 things you can do when effort exceeds reward 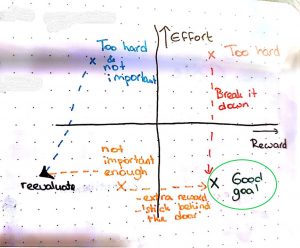 Occasionally (or, in my case, very darn often) you’ll find that the effort exceeds the reward and you just keep postponing. Maybe that’s fine with you and if so – I’d be the last person to judge you. But if it’s not fine with you, there’s a few things you can do.

Motivate yourself with extra rewards

Okay, so maybe the effort exceeds the reward of doing the thing, but who says you can’t motivate yourself with external rewards? My mum used to increase my pocket money if I got good grades and yes, that worked wonders for the effort I was willing to put in. “Hey but that’s not as good as intrinsic motivation!” Maybe. But it still works.

Example: Consider treating yourself to something real nice you won’t usually spend money on with the money you save from quitting smoking and maybe that’ll give you the extra push to follow through.

[Update] Since writing this post I’ve stumbled on this happy blog by Ingrid Fetell Lee where she shares some fun ways to reward yourself.

The famous ‘stick behind the door’

Big goals, no matter how important, require a ton of effort. Often, they’re just too hard (insert “that’s what she said” joke). But what kind of goal can you set that costs a bare minimum of your time and energy and still gives you a perceived reward (and yes, feeling good about accomplishing something is a perfectly valid perceived reward)?

I’ll give you a personal example. By the end of this year I want to sell at least 10 items of merchandising. I’ve never done anything with merch before, so I’ll need to figure everything out as I go. For the first quarter of this year, I decided I want to have the merchandise available. For January, all I need to do is have a clear idea of what text and illustration I want on the merchandise and what type of merchandise I want to start with (shirts, mugs, etc). See how that requires little effort but helps accomplishing the big thing?

And one last thing…

Please remember you don’t owe anyone anything. If you put ‘quitting smoking’ on the list because your friends keep telling you it’s bad for your health, but you don’t really want to give up on it… it won’t do you much good. If it doesn’t really matter that much to you, for the love of god stop pushing yourself. Trust me, setting goals you consistently fail at will just make you feel miserable about yourself.

You don’t HAVE to work on your addictions, spend less money, make a career or do anything else. Sometimes, you’ll discover all these things just doesn’t matter that much to you.

And that’s okay too.

for the FREE challenge and newsletter